Why is a Jewish group dedicated to tolerance honoring a politician who has failed to support religious minorities?

On May 30, Rabbi Arthur Schneier, the leader of Manhattan’s Park East Synagogue and founder of the Appeal of Conscience Foundation, plans to give the World Statesmen Award to Indonesian President Susilo Bambang Yudhoyono. The award is given annually to world leaders who support the foundation’s mission to promote tolerance and respect for human rights. Previous award recipients include Canadian Prime Minister Stephen Harper and German Chancellor Angela Merkel.

But this year’s choice is bizarre. Not only has Yudhoyono not fought intolerance in Indonesia, the world’s largest Muslim-majority country and home to millions of religious minorities, he has actively courted Islamist political parties and granted them key Cabinet positions. He appointed as government minister a politician who blames Christians for their persecution and routinely calls for heterodox Muslim sects to be outlawed. As a result, acts of violence against religious minorities have risen dramatically during his eight years in office. Christian churches in West Java and North Sumatra have been forced to close due to discrimination in the issuing of building permits. Minority Shi’ite Muslims have been forced from their homes by militant Islamists and made refugees in areas where they lived peacefully for decades. Most alarming is the militants’ 10-year campaign of violence against a heterodox Muslim sect called Ahmadiyah; vigilante groups have destroyed Ahmadis’ homes, set fire to their mosques, forced their relocation, and murdered Ahmadi Muslims with the tacit and sometimes outright approval of the government. Just this week, Yudhyono’s religious affairs minister oversaw the forced conversion of 20 Ahmadi Muslims. 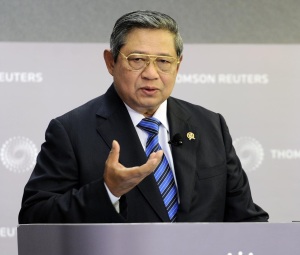 SUSILO BAMBANG YUDHOYONO. “He appointed as government minister a politician who blames Christians for their persecution and routinely calls for heterodox Muslim sects to be outlawed. As a result, acts of violence against religious minorities have risen dramatically during his eight years in office. Christian churches in West Java and North Sumatra have been forced to close due to discrimination in the issuing of building permits.” (photo: setkab)

“It would be hard to choose a more inappropriate person to whom a religious tolerance organization would give an award,”  said John Sifton, Asia advocacy director at Human Rights Watch. ”The simple fact is this: Persecution of minority Christian, Shia, Ahmadiya, Bahá’í has been worsening under President Yudhoyono’s watch, in particular in the last two years.”

Rather than standing up for minority rights, Yudhoyono has sought to appease Islamists. His 2008 decree threatened five years in jail to anyone who “propagates” the Ahmadiyah teaching, stopping just short of the outright ban that Islamists demanded. Instead of guaranteeing Christians the ability to build new churches, Yudhoyono has issued even more restrictive administrative regulations and ignored Supreme Court rulings that sought to protect religious freedom. Furthermore, instead of trying to roll back authoritarian-era laws that limit government recognition to six orthodox religions, Yudhoyono defended the laws on the grounds that restrictions on minorities are necessary for peaceful coexistence. These actions send a message to Indonesians that it is OK to be intolerant toward minorities and have encouraged Islamist vigilantes to use violence.

What’s worse, this abysmal track record is apparent to anyone with access to the Internet. Human Rights Watch has issued dozens of reports and press releases calling on the government to fight intolerance, including calls by members of Yudhoyono’s Cabinet. Every week, the English-language newspaper The Jakarta Post chronicles the plight of Ahmadi Muslims forced from their homes with the tacit or outright approval of local mayors. In the past year, the New York Times has published two op-eds (here and here) lamenting the rise in intolerance under Yudhoyono. The most cursory Internet search turns up dozens of articles documenting Yudhoyono’s failure to safeguard Indonesia’s history of peaceful coexistence.

The proposed award to Yudhoyono has sparked equal parts confusion and outrage in Jakarta. A prominent Catholic priest said the award is “playing in the hands of those few radicals that want to purif Indonesia of all what they regard as heresies and heathens.”  An interfaith coalition of Christians, Shi’ite Muslims, Ahmadi Muslims, and human rights organizations said the award provides the justification for acts of intolerance and mounted a peaceful protest in front of the U.S. embassy. A coalition of organizations representing atheists and ethical humanists called the award “a slap in the face to prisoners of conscience across the world. A petition to Rabbi Arthur Schneier to withdraw the award has garnered over 1,700 signatures from Australia, the United States, Indonesia, the Netherlands, Japan, and around the globe. Most worrisome to the signatories is that the award will further bolster the forces of intolerant Islamists that they are trying to fight.

So, why is Schneier planning to honor Yudhoyono? Numerous calls, emails, Tweets, and posts to his organization’s Facebook page have gone answered. But it is worth noting that Yudhoyono is considered by some to be a “moderate Muslim”—which in his case means that he has not demonized Israel in the U.N. General Assembly. And perhaps the Appeal of Conscience Foundation failed to consult anyone in Indonesia about Yudhoyono’s domestic track record or even do a modicum of research into Yudhoyono’s international record—thus overlooking, for example, his recent speech at the U.N. in support of a controversial international ban on religious blashphemy. The alternative—that Schneier knew of Yudhoyono’s track record but was more concerned with increasing his visibility on the world stage than with the human rights of religious minorities in the world’s fourth-largest country—is almost too disheartening to consider.

By giving this award to Yudhoyono, Schneier is actively whitewashing the failures of his government while strengthening Islamist militants who are trying to marginalize religious minorities. Bestowing the award would be an insult to the millions of Indonesians who are trying to promote tolerance, pluralism, and human rights in their fragile democracy. There is still time for the Appeal of Conscience Foundation to remedy its mistake. Schneier should stand in solidarity with the victims of religious persecution in Indonesia and not only revoke Yudhoyono’s award, but press him to take steps to actually promote freedom in Indonesia.

*Jeremy Menchik is an assistant professor of International Relations at Boston University and was a Fulbright scholar in Indonesia from 2009 to 2010. (socio-politica.com)